Of Castles and Healthcare Licenses

Healthcare calls for human relationship and innovation. Instead, Lansing is presents us with standardization and state control, often through healthcare licenses.

Michigan bills presented in 2021-22 are likely to return in 2023. They would create new licenses for dieticians, music therapists, mental health transporters, and naturopathic physicians, as well as nurse temp agencies and facilities for pain treatment, dialysis, and heart catheterization. (Bill links in the footnotes.)

These individuals currently serve patients. Full stop. Any original thought they may have after years of accredited education should be left in peace to develop for the good of humanity.

Instead, licensing builds persuasive castles in the air. If we are aware of the pattern, we may avoid getting sucked in.

Licenses Promise Castles In the Air 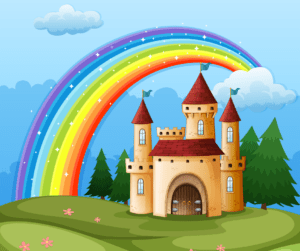 Each licensing story begins with a magical, mythical narrative promising to solve the worst woes of a given part of healthcare. Where pain points throb, or someone claims they do, state license regulation promises relief.

Phase 2 is a flurry of healthcare worker networking and touchingly naive lobbying to pass the new license law. The litany of promises are repeated in person, in committee, in headlines.

Phase 3 is jubilation – it passed!! The governor signed! All our work paid off!!

Phase 4 would be fulfillment of all the promises, if that ever happened. But somehow, it never quite does. Two recent examples are the Midwife License Law of 2015, and the Licensed Professional Counseling Law of 2019.

Passing the Michigan Midwife License Law was, at its most basic, the decision of certified home birth midwives to outlaw their fellow midwives who declined certification. Of course, the narrative wasn’t anything so blunt.

Instead, Phase 1 focused on the shortage of home birth midwives. Licensing, it was promised, meant legitimacy, respect from other professions, the ability to bill insurance, and growth of midwifery!

Five years later, how many midwives are there in Michigan? The Licensing and Regulatory Administration (LARA) lists only 74 – virtually the same as before the law.

LARA itself brought professional counselors to a fever pitch of demanding passage of the Licensed Professional Counseling Law.

It began when LARA announced it would stop facilitating CMS reimbursement – counselling should be licensed for CMS compliance. Instantly, the industry was in an uproar. Overnight, a Facebook group attracted thousands of local counselors eager to lobby legislators.

The bill passed, was signed, and jubilation ensued.

Three years have passed, and once again, the promises remain elusive. CMS refusal to reimburse remains the most active concern in the Michigan LPC facebook group. Second in line: the time billing takes from patient care.

The silent promise of licensing is kept 100% of the time. Every new license comes with the guarantee of state regulation, fees, and paperwork in exchange for the right to earn a living.

In short, control of the profession.

Recently Michigan regulators have cracked the whip over Michigan health professions with fee increases, controlling which medications are prescribed, and indoctrinating us with cancel culture.

Patients and professionals both lose healthcare freedom in the licensing game. The state is the clear winner, with educators a close second. The secret of Direct Primary Care (DPC) success is leaving insurance billing and excess certifications behind.

Instead of getting sucked in by castles in the air, Michigan residents can form a more realistic mental picture of licensing from farm life.

From the state’s perspective, unlicensed (free) healthcare practitioners are untamed, dangerous, and probably not quite clean.

But above all, they are potential cash cows.

The state uses licenses as a way to enforce compliance – much as farmers use a bull tongs nose lead. Michigan professionals are already paying for over 750,000 active licenses.