Why is MDHHS obsessed with Benton Harbor Water? Part 1 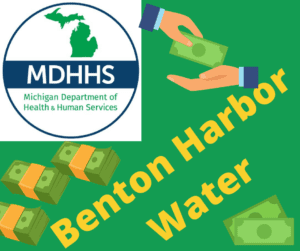 If the volume of press releases is any indication, the State of Michigan’s Department of Health and Human Services (MDHHS) is extremely interested in City of Benton Harbor water. Benton Harbor, located in Berrien County on the southern curve of Lake Michigan, has made headlines for state funded water distribution and lead waterline replacement. Superficial similarities may lead Michigan residents to consider Benton Harbor as “the new Flint water fiasco.” So much spending, the reasoning goes, means the state is appeasing a politically-connected base for some sort of mismanagement by city, state, and federal officials (or all of the above). Though cynicism abounds, no one doubts that Benton Harbor residents have a lead problem. But does their problem warrant this much state interest? Common sense and equity direct state resources equally, or to areas of greatest threat and need.

All testing is not equal. Lead in the blood means neurological damage may already have occurred. Water lead levels are more common: drinking the water carries risk of causing later damage. As an example of water testing, MDHHS identified Benton Harbor among fourteen Michigan cities with excess lead water levels on October 24, 2019:

However, a deeper look at blood lead levels reveals the following facts:

Why did MDHHS single out Benton Harbor for Taxpayer-funded State Aid?

MDHHS began a flood of press releases on October 6, 2021 that still continues. Over the past six months, the state repeatedly publicized “free” blood tests and bottled water to Benton Harbor. Interspersed were MDHHS press releases specifically targeting Benton Harbor with other aid:

The total of MDHHS press releases regarding Benton Harbor stands at 89. This week, Benton Harbor recieved another windfall of taxpayer funding.

To be continued in Part 2.

— the MHF Research Team contributed to this article.